A musical comedy with Barbara Sauter, Richard Wiedl and Sophie Mengele (piano),
Written and directed by Sebastian Brummer in collaboration with Moses Wolff,
with the kind support of the Bayerische Staatsbibliothek.

Who would not like to dine on the table of majesty and speak freely about it from the liver about gossip and gossip of the Bavarian kings Max II and his son Ludwig II? On this evening, the usual "role reversal" is completed: the servants take over the sovereign offices and dine in the great hall. In addition to culinary delights, some of the forgotten musical premieres of the royal court theater are served. By the way, King Ludwig II will be present in person. 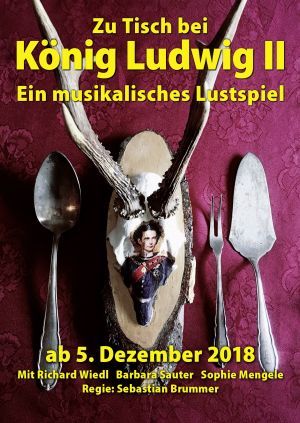